gaijinmike 2013-08-08 12:04:04
WARNING: This review contains plot points that might be considered as spoilers! A hard edged thriller that gives no quarter and expects none in return. Full of unpleasant, morally bankrupt characters, Way Of The Gun is a refreshing take on the kidnap drama thanks to compelling performances, tight direction and a sparse, uncompromising script. Two drifters, violent petty criminals both, come across a golden opportunity to make an easy 15 million bucks. All they need to do is kidnap a pregnant woman acting as a surrogate for a rich family, induce the pregnancy and ransom the baby for a wad of cash. What could go wrong? We meet our protagonists outside a bar, where they proceed to get the shit kicked out of them after an altercation with a patron (a deliciously foul mouthed cameo from Sarah Silverman) Unconnected to the actual story, it’s a perfect introduction to the lives of these two modern day outlaws. Long ago, they decided to reject what society had to offer and walk their own path. Making their own rules and relying only on themselves. Their philosophy is neatly, and coldly, given to us in an opening narration from Ryan Philippe’s Mr Parker, partner to Benicio Del Toro’s Mr Longbuagh (Butch Cassidy and the Sundance Kid’s real names by the way) Way Of The Gun is easily read as a modern day western, and Mr Parker and Mr Longbaugh are the 20th century versions of their famous namesakes. Yet what director Christopher MacQuarrie (the writer of The Usual Suspects) so brilliantly does is to de-mythologize them. These guys are not lovable rogues. They are not charming hucksters sticking it to a corrupt system. They are utterly reprehensible, callous, violent thugs. They are planning to kidnap pregnant women and induce a pregnancy for money. It doesn’t get much lower than that. Paul Newman and Robert Redford would cut off their own arms before doing something so despicable. Yet, like many people with sociopathic tendencies, the two lead characters are quite charming in their own, dishevelled, morally bankrupt way. Their refusal to apologise or make excuses for their lifestyle is refreshingly welcome. They don’t want our forgiveness and they are not seeking redemption. MacQuarrie brilliantly lets Del Toro’s and Philippe’s deceptively simple performances shine through the malaise of unpleasantness and a genuine affection for these two murderers and thieves slowly builds up. This is massively helped by the fact that almost all the other characters in the movie are even bigger scumbags than Parker and Longaugh. The parents awaiting their surrogate bundle of joy are a mobbed up ruthless business man, and a soulless trophy wife (she can conceive herself but just doesn’t want the stress of a real pregnancy) whom is banging one of the bodyguards employed buy her husband. The henchmen, played by the superb Nicky Katt and Tye Diggs are the real villains of the piece. Psychopaths hired for their brutal efficiency and emotional detachment, they immediately begin to plot against everyone so they can keep the ransom money, and kill everyone in their way, including the mother of the unborn child. Juliet Lewis, managing to reign in most of her child -woman shtick is really good as the prospective, reticent surrogate mother. Not exactly innocent, but certainly the victim (in more ways than one) of the movie. Add the disgraced gynaecologist son of the business man and you have a pretty unsavoury bunch that make Parker and Longbaugh look like Batman and Robin in comparison. The closest the movie gets to a sympathetic character, if not exactly a hero, is James Caan’s Eddie, the mobster’s bag-man, and self styled problem “adjudicator”. Eddie is an old man, a survivor. He’s been shot and stabbed and beaten more times than a Joel Silver production stuntman. You can see it in his face, hear it in his voice and feel it in is body language. After a lifetime of violence and doing other people’s dirty work, he’s got nothing to show for it. It is Eddie’s job to safely return the mother and baby whilst avoiding the payment that will lead back to his boss and his gangster associates, which they can’t allow. Geoffrey Lewis pops up as one of Eddie’s long time associates and steals every scene he’s in, a shame he’s not on screen more often these days. MacQuarrie’s direction is superbly crafted and perfectly matches the bare bones, no nonsense script. The kidnap scene is masterfully constructed. It’s tense, humorous and ruthless all at once. The following car chase is impressively low key, more of a slow paced cat and mouse affair than the screeching tire, cardboard box destroying fiasco that a less interesting director would opt for. The cinematography is starkly understated too; a languid mid tones colour pallet along with natural lighting builds upon MaCQarries subtle, excellently unflashy direction. The gunplay is uniformly magnificent. The final shootout, in a Mexican villa no less, is ruthlessly played out and in your face vicious. No slow motion, no horrible shaky cam nonsense, just a well executed scene in which men who know how to use guns go about taking each other down. The sound effects are spectacular, a barrage of sound that really punches the scene home. The score is also brazenly in your face, a staccato western inspired theme that works perfectly. Way Of The Gun is a unique, well crafted, superbly executed little crime movie. In trying to avoid the clichés of the crime film genre, Christopher MacQuarrie has created something special. The film deserves a wider audience and MacQuarrie is a director to be on the lookout for. 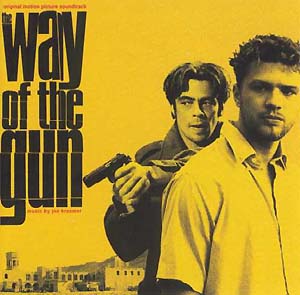 Chishiki (2013-08-28 03:36:24)
Paul Newman and Robert Redford would cut off their own arms before doing something so despicable. <== NICE. Every time I see Geoffrey Lewis I picture him with fangs for some reason? Seriously though, TWOTG is one powerful movie with nearly every actor in it delivering career performances.
COMMENT
Login Register