gaijinmike 2013-08-08 11:36:56
Moon 2009 WARNING: This review contains plot points that might be considered spoilers! A beautifully layered and utterly mesmerising little gem, that is highly crafted and note perfect in performance, direction and atmosphere. This is one of those movies that make you glad to be a movie fan. Sam Bell works on the moon. He is alone, except for his A.I. companion GERTY. Sam is almost through with a three year contract mining Helium 3 for Lunar Industries. He is tired, homesick and desperately lonely. He’s even started hallucinating. But he only has two weeks left and then he can return to his wife and daughter back on earth. Sam has an accident whilst out of the base in a moon buggy. He wakes up in the infirmary. And things start to get very strange from then on in. I knew almost nothing about this film before watching it except it starred Sam Rockwell (one of the most talented actors working right now) Kevin Spacey as the voice of a computer (HAL sprang to mind immediately) and was the feature debut of director Duncan Jones. Moon is a deceptively simple movie. The pace is leisurely yet never boring, the direction is subtle, and frame perfect. It’s not easy shooting in one location. Apart from a couple of trips outside, the running time is confined entirely to the moon base Sam Bell works in. Yet Jones manages to avoid repetition and plodding, showing the place as a lived in, workman’s home away from home. It’s easy to forget you only see five or six rooms throughout the whole of the movie. Jones sense of atmosphere and pacing is impeccable; he lets the story unfold organically and is in no rush to tell his tale. Almost from the start there is a feeling that something is not quite right on this moon base, a few subtle hints and visual ques, such as the reaction on Sam’s face to certain things. All these lend to a very subtle, yet compelling feeling that something is just off kilter. A great deal of this unease comes from Kevin Spacey’s languidly voiced GERTY, the bases A.I. helper. His almost monotonous tone set against the yellow emoticon faces on GERTY’s screen are at once friendly, off-putting and with just a nuance of menace. It is a remarkable performance given that it is entirely voice work in tandem with primitive smiley face icons on a screen. Spacey is perfectly complimented by the ever watchable Sam Rockwell as Sam, the lonely mine worker in GERTY’s charge. Rockwell essentially plays two different Sam Bells. You see, Sam is a clone. The Sam we meet in the first act is replaced in the second act by another version of himself. Sam 1 had an accident and is rescued by Sam 2. And this is where the film truly enters the realm of brilliance. Sam 1 and 2 are essentially the same “person” yet they both display entirely different character traits. They are both scared and confused, though express this in different ways. Sam 1 is the more laid back, vulnerable Sam, having trouble with the situation emotionally. Sam 2 is angry, short tempered and prone to confrontations. Eventually a kind of brotherly bond emerges, as they both try and figure out what the hell is going on. Rockwell’s performance is in turns heartbreaking and stoically dignified. It’s an absolute scandal he didn’t win more major awards for his performance. Here again Jones shows his creative chops. It would have been so easy to go down the evil twin road, or have GERTY as the homicidal A.I (Spacey’s casting screams evil robot) But Jones, whom penned the story on which the screenplay is based, is better than that. Instead he gives us a subtle yet engrossing character study As Sam’s 1 and 2 slowly come to understand the ramifications of their plight. There are subtexts galore throughout Moon. What makes a person who they are? The nature of being human, friendship, trust, technology, energy, consumerism, the environment, corporate practices, all contained delicately in a neat little sci-fi package. Visually Moon is beautiful (watch it on Blue Ray if you can). Stark, almost monochromatic images, beautifully constructed by Gary Shaw lend a haunting feel to the imagery. The visual effects are wonderfully realized, mercifully CGI light, the majority of the effects appear to be miniatures and model work, enhanced by subtle use of CGI when necessary. It works beautifully and is a lesson to other directors whom believes CGI is the only option. The music, by Clint Mansell, is a perfect compliment to the visuals. It is simple, ethereal almost, and lends a huge amount to the atmosphere of Moon. Moon is intelligent, “grown up” sci-fi the likes of which seem to have gone out of favour of late. It reminded me most of Solaris (both versions) Silent Running and 2001. Yet there is a smattering of Alien (the wonderfully lived in look of the moon base) and even Blade Runner (three year lifespan) and many other films that inform both the director and audience. This is not a pastiche, or homage, Jones is far too talented for that. It’s more of a salute, a nod to those that went where no man had gone before him, but always looking to the future, carving his own creative name as he does so. 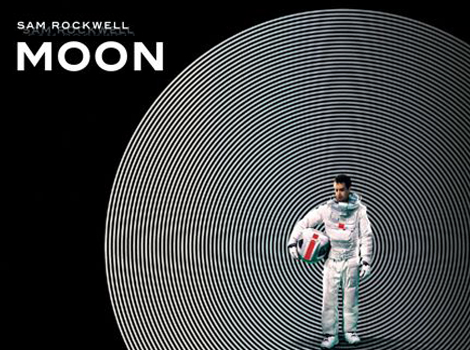 Chishiki (2013-08-21 03:00:00)
I think anytime you make a movie that makes people think, it is destined to be overlooked, unless the tone is preachy... then you get an Academy Award.
Chishiki (2013-09-19 15:37:16)
I love how nuanced in human emotion GERTY is. There's a part where it is confirming to Sam #1 that he is a clone and telling him the implications for his health, and in an attempt to comfort Sam, GERTY its robotic arm ever so delicately on his shoulder pulling away when Sam springs back to life.

And you know the part where he's crying and wanting to go home, with the Earth looming large outside of his windshield beyond the horizon? I've felt like that in Japan a few times...
gaijinmike (2013-09-19 15:50:21)
Yeah, its amazing how much emotion can come be expressed from a voice and emoticons on a screen.